The Epic Project was intended to produce the largest exhibition and seminar space of its type in the UK using sustainable construction techniques and materials. Given its size (over 100m Long and 10m high) it sits beautifully in the landscape of the Lincolnshire Showground.

Design Overview
The centre presented challenges in the size, layout, requirements and diverse nature of the spaces. From an early point in the design process we decided that the quality of audio and video was to be placed at the forefront with less emphasis on flashy digital control systems, nice as they are, they would eat horribly into the budget leaving little money to spend on what we feel is important in the experience for the visitor – can they see and hear what is happening? Our design has resulted in a largely analogue based control system that is flexible and easy to use. Following the ethos of the Epic Centre we wherever possible specified equipment from UK manufacturers such as Cloud Electronics, Clock Audio, JM Lecterns, Smart-E, Allen & Heath, XIXIN and ourselves. 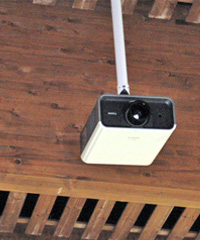 The video requirements for halls one and two dictated highly capable projectors in terms of light output (6500 ansi lumens) due to the size of image (4-5m), screen medium, size of hall, light levels and position of projector. The Canon LV-7585 model specified has a fully motorised lens system featuring lens shift for correction of keystone introduced distortions. Hall three has a smaller projector with a smaller projected image. The suites on the first floor are again furnished with projectors. Good quality electric projector screens with a width of 1.8m with infra red control are proposed. Local control of projectors is as usual via infrared control handsets. 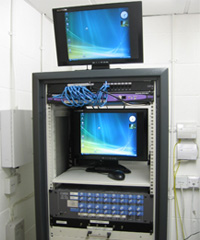 Each hall / room has its own video input plate, distribution of the video signals is done by an 8x8 Smart-E video matrix switch this is centrally controlled by a PC and can route by virtue of the matrix, the video to any of the screens. Audio routing of any video audio is done by the Cloud zoners. The resolution of the video is to be nominally XGA this is in order to guarantee the quality across the venue due to the varying lengths of cat5e cable and the limits that it imposes (In most cases the system and projectors support higher resolutions). In addition to the control PC a Laptop computer is also included for the testing / set up of facilities prior to use by a customer and also as a back up in the unlikely event of the control PC failing. A further advantage of the Smart-E matrix switch and the Cat5e output is the flexibility in a building flood wired with Cat5e cable allowing additional screens / projectors to be temporarily added to the system in various parts of the buildings exhibition spaces.
Halls one and two are provided with two additional video outlet points in suitable places for hired in temporary screens. The Epic centre control rack featuring in purple the Smart-E video matrix switch and in blue the Cloud Z8II zoner below the monitor. 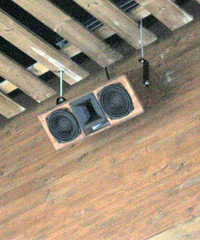 When dealing with audio in any large space special attention must be paid to the control of sound dispersion and variations in level, this is particularly true of long aspect ratio rooms such as the two main halls. HiQ Sound has many years experience in design and manufacture of speaker cabinets tailored to the space in which they are intended to work and this is no different. We designed a cabinet, six or seven of which would be used in each of the large halls suspended centrally in front of alternate Glulam beams. The dispersion pattern is arranged to ensure even coverage through the venue and time aligned so that the sound appears to emanate from the front (removable wall) of the venue. Two further cabinets would be used in the centre hall and when the halls are amalgamated the time alignment is effected from the central hall radiating the sound outwards from the centre. The presentation is monaural; the use of stereo in such situations creates problems with time alignment i.e. only people on the centre line get perfect time aligned sound. In addition the speakers would be built specifically for this purpose and as such can be painted to blend in with Glulam beams as far as is possible. The hall systems would be capable of in excess of 95dBA through out the venue providing plenty of headroom for the system.

One of the custom built speakers in the East Hall. The finish was stained wood to match as far as possible the Glulam beams that support the roof. A decision was taken early on in the project not to fit grilles to the speakers as it was felt that damage was unlikely in this environment and everyone liked the “retro” look of the supplied test speaker. 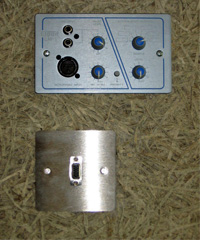 The Epic centre is effectively managed as six separate room / zones by a modified Cloud Zoner. The purpose of this is to provide local control near where it is required at the same time limiting the degree of control by users of the venue. The main control equipment rack is sited in the communications room. Within each zone a wall plate portal (LM1 modified) would be provided, consisting of a microphone input and a line level input with independent level controls and a source select switch. This is for basic level use and the microphone and line input would be active in that zone. The portal in any zone may by use of the source selection receive the audio from any other zone allowing the combining of any zones. This selection feature may be overridden at the zoner preventing misuse or abuse by venue users.

In addition to the basic LM1m interface two lecterns are provided as part of the initial install, more could be 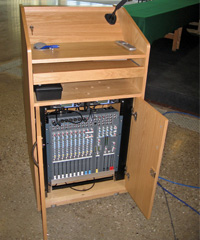 The 32 channels of amplification required were supplied by four 4 channel class D amplifiers satisfying the power efficiency requirements of the building. Time alignment and system equalisation is achieved with two Behringer Ultradrive Pro DCX2496 units, which we have found to be surprisingly good and easy to use (unlike some more expensive units on the market).

Paging microphones on ground and first floor allow the paging of any or all of the zones automatically overriding any other audio present in that zone. General background music is provided from a CD player in the main rack or even MP3 files from the control PC. The latter facility will allow pre-recorded messages to be played out over the system when required with public information.

We feel that this design specification provided the flexibility the Epic Centre requires whilst providing excellent audio and video facilities within a tight budget. The system may be enhanced in the future furthering the capabilities on offer at the centre as it settles in to its role and the demands on it made clearer.